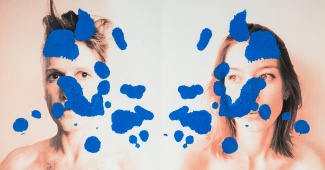 Based on a shared fascination for the traces that a movement leaves behind, Aline Breucker and Quintijn Ketels set up the company Side-Show in 2009. The cross-disciplinary approach of the company leads to performances that demonstrate a unique combination of circus and visual arts.

Aline Breucker thinks in pictures. Since graduating in scenography from Brussels’ École Nationale Supérieure des Arts Visuels de La Cambre, she has been building bridges between the visual arts and the moving body in the performing arts. She does this in various media as a visual artist, and as a costume designer and scenographer in circus, opera, dance and theatre. Aline began her artistic career as an assistant to Vincent Lemaire in the opera houses of Innsbruck and Zürich. She designed costumes for Hopla Circus, Le Carré Curieux and many other circus companies and artists. Together with Jorge Jara, she designed the scenography for La Traviata (2009) at the opera house in Santiago (Chili). In 2010-2011, Aline was involved in the project Face-O-Scéno , in which an exchange took place between scenographers from Burkina Faso and Belgium. In this period, she worked on projects including the Pan-African theatre festival The Récréatrales and on a performance of Un Paradis sur terre for a young audience. As a costume designer, Aline also had a longstanding connection with the Ecole Supérieure des Arts du Cirque (ESAC). Circus’ rich history acts as a source of inspiration for her work.

Before studying at Ecole Supérieure des Arts du Cirque (ESAC) in Brussels, Quintijn Ketels devoted himself to acrobatics at Cirkus in Beweging and to classical piano at the music academy. Although the music never disappeared, movement gained the upper hand. With La Familia Rodriguez from Hopla Circus, which grew from his graduation project at ESAC, he embarked upon an intense, five-year global tour with performances in China, Mexico, Israel and various European countries. Thanks to a Wild Card from Wim Vandekeybus/Ultima Vez, in 2014 he took part in the Dance WEB Scholarship for Contemporary Dance and Performance at the ImPulsTanz dansfestival in Vienna. In the meantime, Quintijn also continues to teach at Espace Catastrophe, ACAPA Tiburg and Cirkus, where he is responsible for the specialist subjects aerial and partner acrobatics.

Quintijn and Aline met one another at ESAC Brussel, when Aline was making costumes for a number of graduation projects. Based on a shared fascination for the traces that a movement leaves behind, they created together the company Side-Show in 2009. Their first performances Wonders (2013), Spiegel im Spiegel (2017), Sho-Ichidô (2018) and Portraits (2021) were characterised by a strong visuality. In their work they attach great importance to shared artistic research, such as Permanent Laboratory: From A to B. For this, Side-Show set up a series of 10 residencies (2015-2016) with the support of the Flemish Community, for which the company invited artists from various disciplines including dance, theatre, circus and visual art. The only goal is to define an individual physical language in which the body is both the object and the subject of research. Together, Quintijn and Aline have not only created a company, but also a family. This intense dynamic of living and working together is a defining factor for the themes in their work.

What if are the research projects that Side-Show carries out alongside its production mode. In a number of short projects reminiscent of an alchemical lab, fledgling artistic ideas are developed and honed. There is just one rule: the outcome of the project must not be predictable. Giving time and space to new ideas in this way allows for the creation of an unpredictable future. And this forms the core of the project: the labs ensure an improbable outcome and feed existing or new collaborations. At the end of a What if project, insights and material that has not yet gelled into a concrete form are shared with an audience.

Under the heading In-Side-Out, Side-Show wants to open up the knowledge generated within the company to the wider circus and arts field. This is done through mentoring and curatorship, exchange moments, coaching and interdisciplinary workshops.

Side-Show makes a sustainable contribution to the development and professionalisation of the circus field. From its home base in Brussels, where the company is anchored in both language communities, Side-Show collaborates with national and international partners on research, production, presentation and distribution. As of 2021, Side-Show is receiving structural support within the Flemish Circus Decree.