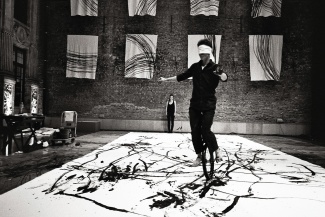 Sho-Ichidô is a combination of the Japanese words for art and calligraphy (shodô) and unicycle (ichi-rensha). For the project, Kenzo Tokuoka was invited to collaboratively develop a monumental graphic language with a body, a unicycle and Chinese ink as instruments. The driving force for research and the central question is how movement leaves traces. Measured and meticulously-thought out preparations precede the snapshot to which the audience bears witness. On a huge surface, Kenzo’s unicycle leaves behind it lines that record his movement through the space, thus creating a composition in dialogue with the space.

The idea of Sho-Ichidô arose in a lab, without an agenda and simply with the desire to test all kinds of materials in combination with Indian ink and a unicycle. We therefore never considered it a real show, but rather a performance. Sho-Ichido is constantly being adapted according to the places where we play.
Quintijn Ketels